From Arcmage Wiki
Jump to navigation Jump to search

ARC-mage or simply 'arcmage' is a card game with free (downloadable) cards.

To play arcmage you need a few things.

Building your deck well is vital to success in the game. Players build their decks according to their personal playing style. Your choice of cards dictates your options during the course of the game, and directly affects how well you might fare against your opponents. As the game proceeds you will draw a given number of cards from the deck almost every round. The deck is shuffled at the start of the game, so you seldom know what cards you might draw. Usually, you would want to have a deck prepared before you sit down to play a game.

To get you started, we have some pre-constructed ready to play decks available:

A player wins when either all other players have been defeated

A player is defeated when any of the following occurs:

In cases where all remaining players are defeated at the same time, the game ends in a tie.

The convention for counters used for resource cards is: Green for Gaian, Black for Dark Legion, Red for Red Banner, Blue for House of Nobles and White for The Empire.

Available (unmarked) resource cards are necessary to play cards from your hand. 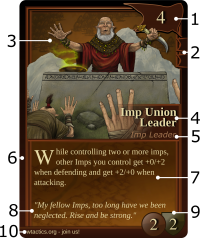 A card is played in this way:

Note that the marked resource cards are considered consumed for this turn, and may not be used to provide power for other plays. Even if the card should end up not being resolved (played)--which might occur due to interplay of rules--the spent power is not recovered or refunded during the same turn.

Prerequisites written on a card are often unique to the card. They vary highly from card to card.

Example prerequisite: "This card can only be played if you control fewer creatures than your opponent(s)."

The battleground (the kitchen table :-) ) is divided into several areas. Below is a depiction of the proper table setup for one of the players in a game. Each player should have the same table layout in front of them.

When you build a city you place it in your Kingdom area. When creatures visit the city they become residents of that city and are placed on the same imaginary row as the city. Cities are peaceful places, so residents of a city can not launch attacks, but they defend their city bravely when attacked.

Creatures that will help launch an attack or defend against enemy attacks must be in your Army area, face up.

Each faction in your deck has its own vault of resource cards.

This area is where the deck resides and from where you draw new cards every time it becomes your turn.

The area where all the discarded, used up, wasted or killed cards go. These might be, for instance, dead creatures, or used event cards. All cards in the graveyard are to remain face up, and any player may search through any player's graveyard at any time. Cards in a graveyard must remain stacked in the order that they enter the graveyard: first discarded (or used, etc.) card on the bottom, most recently discarded on the top.

The area is where your remaining unbuilt cities lay dormant. Skip your turn to place one of these in your kingdom.

Not really an area, these cards you hold in your hand.

Before playing the game, each player selects the three cities from his/her deck and puts them in a separate stack on the table in the Kingdom area, face down. All players may shuffle any decks afterwards.

Each player then draws 7 cards from his/her deck, to hold in hand (not showing to the other players).

The game is played using individual player turns, that are divided into different phases. Agree on a method to choose which player will go first.

The player going first looks at his stack of city cards, picks one and puts it on the table in the Kingdom area, face up. Then the following player does the same and this is repeated until every player has one city out. Then the first player's first turn it up.

A player turn is made up of the following phases:

The phases must occur in the given order. You can't, for example, enter a Play phase once you have finished the Discard phase of your turn.

During the draw phase, the player must take 1 of 3 possible courses of action:

If the player has no cards in hand, (s)he must draw at least one card.

The player draw all cards at once, then plays the resource cards.

There are 3 different card types: #Creatures, #Cities, and #Spells. Spells are divided in 3 subtypes: #Events, #Magic, and #Enchantments.

Creatures are the backbone of every army, they are the courageous forces that will bring a player glorious victory (or a miserable defeat that is best forgotten).

During the play phase a player may put new creatures into play by paying their power cost and then placing them into a city the player controls. Creatures may not be put into the Army directly, but they might be moved from a city to the Army at a later stage in the game. Creatures that are part of the Army can attack the opponent, as well as defend against enemy forces. Creatures that are part of a city are only able to defend against attacks on the city; they may never participate in an attack.

Unlike other cards, creatures have specific and distinct values that show their fighting ability in combat:

When a creature suffers damage equal to or greater than its Defense during a single turn, the creature is put in the Graveyard (of the creature's owner), along with all cards attached to it. Inflicted damage does not carry over to the next turn: If a creature was not put into the graveyard, it regains its full Defense strength at the end of the turn.

When other cards manipulate these combat values, they are often paired and written in the form ATK/DEF.

Creatures may have additional abilities giving them advantages (or disadvantages). Sometimes abilities only take effect when certain prerequisites are met or costs paid, such as marking the card. A card's abilities and any requirements thereof are written on the card. There is an extensive list of abillities and they are further described in the Types of Abilities section, below.

To move a creature the player must:

Cities are the heart of your kingdom, and may give you tactical advantages over your opponent.

A city belongs to a faction, and is to be placed in your Kingdom area, face up, visible to all players.

All players begin the game with one city in play. However, a player may skip an entire turn and instead pick one of his/her unused cities and put it into play, face up.

When a creature is in the city it is considered a resident.

Any left over unblocked attacking creature deals damage to the city. Damage dealt to a city is permanent and the lost defense strength is not restored after the turn. (You can keep track of the city's defense strength by placing 20-sided die beside it). When the city's strength is reduced to or beyond 0, it is destroyed, and its owner must put it in her/his Graveyard.

When all of a player's cities in play are destroyed, that player is defeated.

Cities can provide effect's (which can give the player a tactical advantage) when they reach a certain level of devoted residents. During the player's Tactics phase, he/she can mark any number of residents to indicate their devotion to the city. The city's current devotion is the sum of all loyalty marks given by all devoted residents. When it reaches the level indicated on the city card, the effect is active. Cities may have multiple devotion levels, triggering stronger effects.

The active player chooses the order of the cities and are then resolved one by one. For a given city he/she declares all the creatures that will show their devotion to the city (all at once). Any player may react to that (e.g. killing one of the declared creatures). Finally the declared creatures are marked, and the devotion is calculated. For each city level reached, the effect is triggered (mandatory). They are resolved in order, lowest levels first.

In short, the last played card's effect is applied first. At any time, new event cards can be played.

When a card is legally moved from hand, main deck, cities deck or grave onto the game table it is entering play, and if nothing hinders it the card is then in play.

All cards that have been paid for, if any, are considered to be in play. Typically that would be all permanents that are on the table, like your creatures and enchantments.

The Mark Me symbol

Some actions, abilities and rules require a card to be marked when the player wants to use it in a particular way. Marking is not a cost. It should rather be seen as a kind of prerequisite, an action that needs to happen in order for an effect to happen. Whenever the mark me symbol is shown (a horizontal rectangle with a symbol within,

) it means that you have to mark the card itself if that is a prerequisite for whatever you're trying to accomplish.

As in many games, some rules and mechanics may seem to contradict themselves at times. This is actually a feature and what makes CCGs deep, complex and modular.

Rule conflicts are to be resolved thus:

Abilities are not limited to just creatures. Some Magic cards can grant creatures additional abilities they wouldn't otherwise have.

There are three main types of abilities: passive, activated and triggered.

A passive ability is one that takes effect and abides without needing any associated cost to be paid, any action to be taken, or any particular requirements to be met. As soon as the card with the ability enters play, the ability is active. It ceases to affect the game when the card leaves play.

Example: "All Elvish creatures get +3 Defense" is a passive ability.

There are three types of costs that must be paid to activate abilities: power cost, marking and custom cost.

Activated abilities are always written in the format